Jon Del Arroz is known as the leading Hispanic voice in Science Fiction, blogging about sci-fi, geek culture and free speech to more than 10,000 readers per week. His debut novel, Star Realms: Rescue Run is nominated for the Dragon Award for Best Military Science Fiction and his most recent book, For Steam And Country is hailed as the hottest new steampunk series of 2017.

You can find him on Amazon, Goodreads, Twitter, Gab, and his blog.

I’ve created stories for as long as I can remember. On long car trips with my parents as a kid, I’d close my eyes and conceive of sci-fi worlds where I’d be gallivanting about the universe. Unlike most writers, however, I delved into writing as a social endeavor first, which translated into real writing later.

In 1996, I discovered online roleplay. On the ancient service America Online, there were legions of people who got together once or twice a week, setting up times to run our own Star Trek stories. Sims, they were called. One person would act as a game master or moderator, and push the story along, while the others in the group would play out their stations and how they handled the crisis that week. There were no rules, it was purely a narrative experience where everyone understood they had a part to play to keep the narrative going. I fell into that moderator role quite often, coming up with deep plots that carried over week to week. The folk on my sims tended to want deeper writing, and develop characters a lot more than I saw from many of the others.

I began writing my first novel on the side in between my online role playing, of which I continued through a couple years ago. I’d pick off a little bit at a time, never really focusing on it, and often have to start over again as I became a better writer. Nowadays I understand write the whole thing before you get into editing, or you’ll be stuck in an endless cycle of never completing a story. Then, I didn’t know any better. It took me eleven years to complete my first novel, which I went back and rewrote a few months ago, tearing apart the entire book and redoing it from scratch.

The problem was I loved that social element more than my solo writing. I’d found my way into real roleplaying systems over the years: Legend of the Five Rings, Star Wars D20, Deadlands, 7th Sea, and played along with rulesets and much bigger backstories. Keeping these rules in mind meant creating longer sessions and spending more time with my community, less writing for my novel. It was hard to pry myself away from this and work on something that didn’t give me the instant gratification that telling stories through online roleplaying gave me. This slowed my productivity down considerably.

Through my roleplaying, I found my way into writing background stories and flash fiction for a card game Doomtown: Reloaded. This was based in the Deadlands RPG world and was still interactive as it had four writers working on the project. We’d collaborate and pick apart each other’s ideas. It was a lot of fun, and yet unlike years prior, I was producing real fiction and getting something from it. Having people read my work and enjoy it was intoxicating. I started to spend more time writing fiction and less time on my roleplaying chats.

When my debut novel released (which was the third I’d written), I never turned back. Once I figured out I could get paid for creating the stories I’d done online for free the whole time, well, let’s just say that was a game changer. Pun intended.

I miss the social interaction that roleplaying gave me, but now I have a community of thousands who read my work and interact with me because of it. The process is a lot less social, but the result is many more friends than I ever could have expected. Because I had to come up with stories on the fly so often for those role-playing games, I have so many ideas swimming in my head. Hopefully I’ll be able to write them fast enough to get them to my readers! 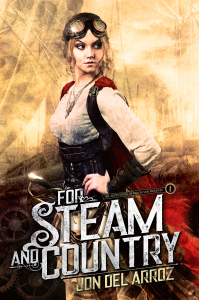