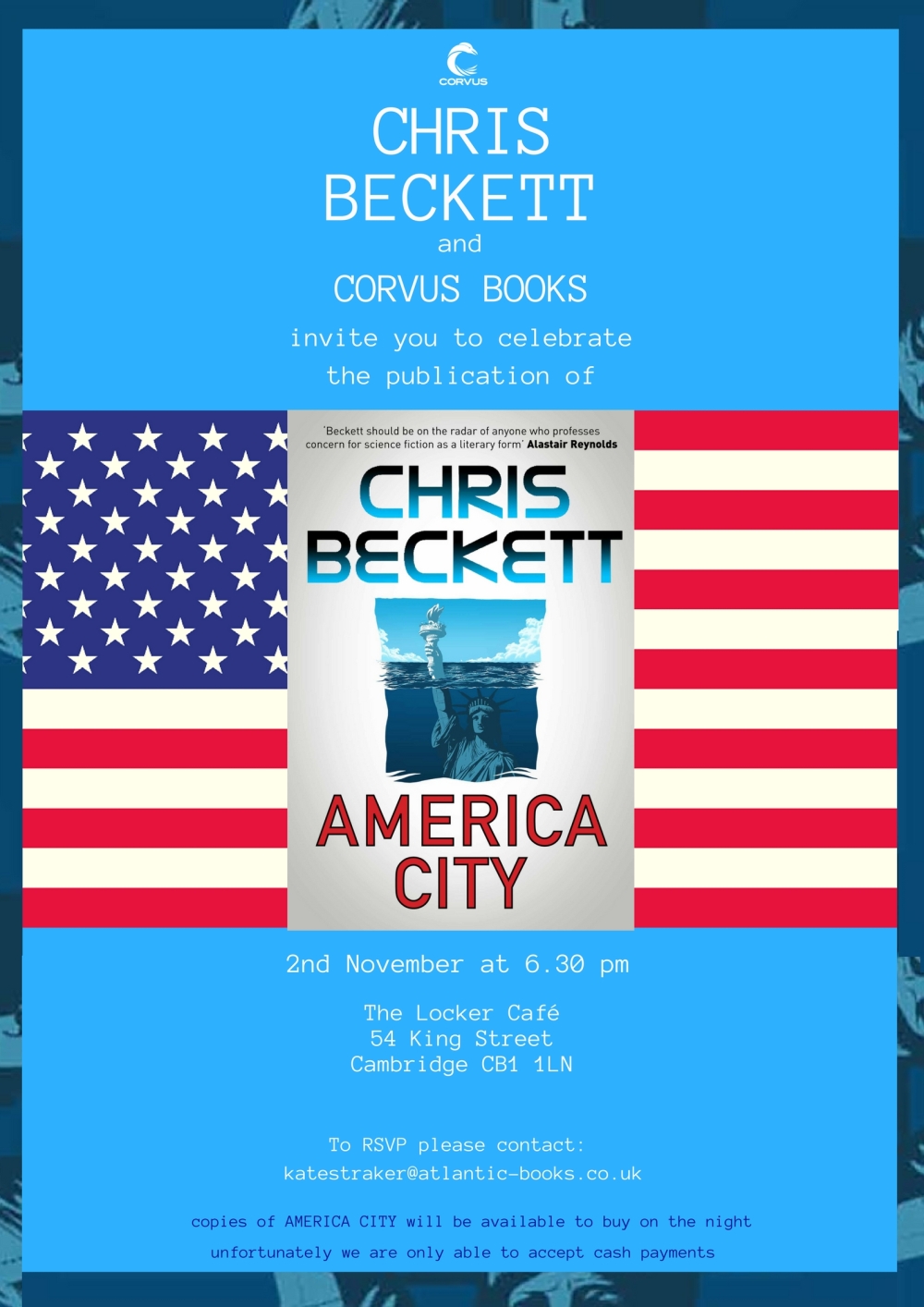 With the launch of his new novel, Zeroflash decided that a brief chat with award-winning Science Fiction novelist, Chris Beckett was in order. Chris is a Cambridge resident and as published a number of books, including a couple of short-story compilations – most notably The Turing Test, which won the Edge Hill Short Fiction Award in 2009.

His latest offering, America City is available at all good retailers in November 2017…but what’s it all about?

Chris, what’s this book all about?

In the next century, changes in the climate mean that powerful hurricanes strike the East Coast of America repeatedly all through the season, right up to Delaware and even further north, while large areas of the south west US suffer from such chronic drought that farms and communities are abandoned because it’s just too expensive to provide water.  This has resulted in a major internal refugee area, with homeless people from affected areas (like the Okies of the 1930s, but on a much larger scale) moving north in search of a new life, and northerners becoming increasing unhappy about this.

A young, ambitious, British-born publicist, Holly Peacock, takes on a new client: the charismatic Senator Stephen Slaymaker, whose one big idea is that somehow the population of the entire country has to shifted around before north-south tensions tear it apart.  Slaymaker, a former soldier and businessman, is a self-made man who started out on a trailer park and became a billionaire, and his politics are much more conservative than those of Holly and her friends, but the two establish an immediate rapport and it is Holly who eventually becomes the mastermind of Slaymaker’s successful bid for the presidency.

But how does she manage to sell the idea of a population transfer to Slaymaker’s power base in the northern states, where people are so resistant to helping southerners as to be seriously talking about establishing internal frontiers?  Holly comes up with a plan which works, but it involves some pretty dirty tricks, and has devastating consequences which she did not anticipate.

How long did it take you to write?

Depends whether you include false starts, and early prototypes, but it was my main project for a year, and also involved a fair amount of preliminary reading on American history and politics, climate change, meteorology and, specifically, on the aftermath of hurricane Katrina.  (I was very struck by how quickly the victims of that hurricane were ‘othered’, how they were turned from compatriots in trouble, to a kind of threat, and that was one of the main starting points for this book).

Is inspiration for your stories something you find or work for?

Occasionally a story will pop in to mind fully formed, but usually I have to work very hard to find it.  Often it only comes when I’m starting to wonder if I should give up!  The trick is to assemble a bundle of disparate preoccupations that, at some intuitive level, feel like they might be part of the as yet unknown book or story I hope to create, and just keep banging together in different ways until something clicks.

In this book, these elements included climate change (obviously), hurricane Katrina, and a jumble of ideas I’ve had knocking around in my mind for a while about social class and what we call ‘left’ and ‘right’ in politics.  Also: Twitter and its echo-chamber effect, and fake news, and trolls and bots.  Even just the name Slaymaker with its ambiguous meaning –I borrowed it from an administrator at the University of East Anglia– was an important element in the final synthesis.  And some lines from Beowulf.  And Dr Faustus.  And, I think, a little dash of The Moon is a Harsh Mistress by Robert Heinlein, which also describes a highly manipulative political campaign which achieves its objective, but with unintended consequences.

Your work has received many compliments – “A masterpiece” The Guardian for one. How does that make you feel?

Well it’s lovely.  Like many people, I don’t have a particularly high opinion of myself so it is immensely reassuring when someone finds something of value in a story I’ve made.  It also spurs me on, like people shouting encouragement from the side lines when you’re running a marathon.

Your latest collection of short stories, Spring Tide is out in 2018, what can you tell us about it? How does it differ to The Turing Test and The Peacock Cloak?

Both of the other collections were science fiction stories, written over a period of years and previously published in magazines or anthologies.  But the stories in Spring Tide have never been published before.  Some of them had been knocking around half-finished for a while, but most were written from scratch specifically for the collection.

Another thing that’s different is that, although it includes stories with fantastical elements – for instance one deals, from the point of view of an angel, with the history of the universe from creation to the end of time– none of them are really science fiction, and many are little portraits of fairly ordinary people living in our own familiar world.  Loneliness is a theme, but also the overcoming of loneliness.

Given that America City and Spring Tide are done, what’s next? Might we suggest a sit-down and a cup of tea?

I’m very good at sitting down and having cups of tea, I can assure you.  In fact I was saying to my wife this morning that I’ve decided to embrace the fact that I’m just one of those creatures, like a Slow Loris, that moves about at a more leisurely pace than other animals.  I’m not sure she thought this a good plan.

But I am now working on a new novel project, which I don’t want to say any more about at the moment because it is still very much at the development stage.  I’m also writing some short stories.