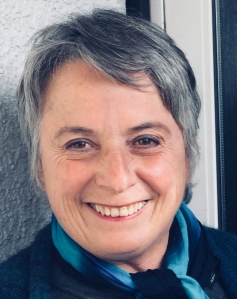 What are the happiest memories in your writing career?

Last year hit the jackpot for writing happiness. My pamphlet of flash fictions, The Chemist’s House, thirteen fictions based on growing up in mid -Wales in the middle of the last century, was published by V. Press. I organised the inaugural Flash Fiction Festival in Bath with the help of Ad Hoc Fiction, Meg Pokrass, and a great festival team. It was a huge success. I  also won the Retreat West and one of the Word Factory monthly Flash Fiction competitions, was short listed in the Bridport Flash Fiction prize and read my short stories at different events.

How do you handle success and failure?

I move on from writing rejections fairly quickly with the help of biscuits, toast or other indulgences. I could submit more. Success is great. It’s often a surprise. I like mentioning successes on Twitter and Facebook because the other writers in my  little social-media world  are so supportive. It’s nice to get a clap or two.

What makes you write when you’re exhausted and your fingers ache?

I never get as far as being exhausted from writing fiction. Somebody on Face Book posted a list of now defunct words from historyhustle.com . I know one of these words – ‘slugabed’ –  (16th century) “a person who stays in bed after the usual or proper time to get up”. Staying in bed too long  is one of the ways to combat exhaustion as I don’t stay up too late either, usually.  But I also ‘perendinate’  (19th century) “put off until the day after tomorrow”. Having said that the end joint of my middle finger  on my left hand has gone wonky, probably from too much time on the keyboard doing organisational stuff.  I have goals to write more fiction this year, even with the wonky finger.

Advice to young or new writers?

Young stretches a long way. Forty is young really.  Don’t let a number put you off.  If you start in earlier decades, you draw on different energies and concerns. But writing from all ages and angles is interesting.  There is always so  much to say about the state of the world as well as the ins and outs of relationships. If I was beginning now, I wouldn’t leave so many gaps when I didn’t write. And I wouldn’t spend time on trying to write a novel. I would stick to short fiction.

I like holding a book. I like the smell of new books and I like reading in the bath. Digital and baths don’t work that well for me.

Do you have a blog?

My blog is judehiggins.com and I aim to post something every month on writerly matters, sometimes about what I am up to and sometimes about other things. If you want to take a brief look or follow me, that would be lovely. Thankyou. Otherwise I often interview writers on bathflashfictionaward.com and bathshortstoryaward.org

To finish, let me give a small fanfare for a couple of flashy things. First, please visit the new online bookshop at Ad Hoc Fiction. You can buy all the Bath Flash Fiction Anthologies at the shop and more individual collections are coming soon. Bookshop.adhocfiction.com

And do come to the the second Flash Fiction Festival, which is taking place 20-22 July 2018  in Bristol.

Booking will be open in mid February  at flashfictionfestival.com and there will be workshops, talks, book launches and readings from well-known flash fiction writers  and readers from the UK, Ireland, Germany and the USA.

One thought on “Getting into writing – an interview with Jude Higgins”